A Club Ambassador goes to Antarctica!

Ranking highly among my passions are traveling the world and Toastmasters – That means that being a Club Ambassador and the associated mission is such a great fit and comes naturally to me!  It may also explain 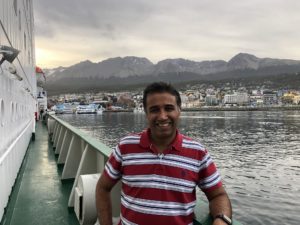 why I took on the role of Club Ambassador Chair for District 101 in 2018-2019. In March 2019, I had an opportunity (a “once-in-a-lifetime” opportunity if you will) to travel to a pristine and beautiful place, the “last continent” – Antarctica!!  I was traveling there with 100 other runners on to complete an important personal milestone of running at least one full marathon across each continent and joining the exclusive 7 Continents Club. I digress. Anytime I visit a new city, country, or continent for that matter, part of my Toastmasters mission is to look up and visit clubs. Over the last 6 years as a Toastmaster, I have had the opportunity of visiting over 20 clubs across 5 continents.  Naturally, when the Antarctica opportunity came up, I looked up clubs to visit there too.

It was a month before my trip. I had heard that there might be a Toastmasters club in Antarctica. A search on the Toastmasters website came up empty. So did speaking to members and district leaders and feverishly searching the internet, with my closest friends, Google and Bing 😉 .  Since I was part of a tour group on a ship, I was not even sure if I could break away to visit a club anyway. Maybe, this is a blessing in disguise, I thought. 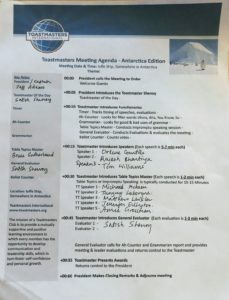 Time passed – it was now 2 weeks before the trip. The Club Ambassador in me was getting unsettled. I had to visit a club. Then it hit me… if there was no club on the continent, why not create my own club meeting? After all, with 100 of us on a ship together for 14 days, what better way to spend some of the time than sharing our stories at a Toastmasters meeting? I reached out to our tour coordinator, Stephanie. I wanted to know if they would let me host a Toastmasters meeting and fit it within the already hectic trip itinerary. Stephanie was helpful, but was non-committal since the team captain had the final say. 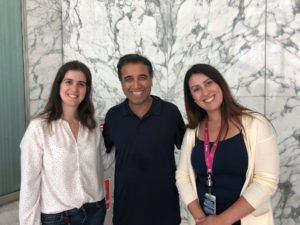 There was now barely a week left. I had to do something and quickly!! I decided I would host my own meeting on the ship – The only thing I was going off of was the hope – even though there was no way to contact our team captain, no way to know if there were other Toastmasters on the ship (since they didn’t give out details of others on the ship), no way to know if after all this, a meeting would happen after all. I also realized that to do this in an official manner, I might need approval from the Toastmasters organization, but there was no time. Was this effort jinxed? I heard an inner voice say NO!! I had to keep moving forward. I decided I needed at least 2 things – a commemorative banner and an agenda. Over the next 2 days, I designed the banner and put together an agenda. All set… or so I thought! I had yet to get the team captain on my side. But that had to wait until I got on that ship.

On March 11th, we landed in Buenos Aires, Argentina, to acclimatize ahead of our marathon and the ship that would take us there. Completely the marathon successfully was definitely at the top of our mind for all. While in Buenos Aires, I had an opportunity to briefly meet our Toastmaster brethren at BA Tango Toastmasters. Three days later, we found ourselves setting sail through the notorious Drake Passage – 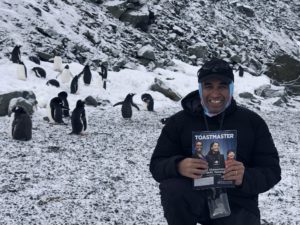 one of the most dangerous passages in the world. Antarctica, here we come!  On the second night on the ship, over a drink, I approached our team captain, Jeff. To my pleasant surprise, it turned out that Jeff had heard about Toastmasters and he told me that he would figure how to fit it into the ship itinerary. He recommended that we scheduled it after we had completed the marathon. Made sense to me and I was thrilled!  But wait, the next task was to get my ship mates interested. Even my ship roommate, Rajesh was not spared :-).  Jeff’s support turned out to be critical. He announced the plans for the Toastmasters meeting one night at dinner when most of my 100 shipmates were present and invited me to add my comments. And to top that, he added it to the official agenda and that helped build credibility for the event. Separately, I kept spreading the word to my new friends on the ship. One of the wonderful folks that I had befriended during the trip was Bruce and Helen who are from Australia and now live in Houston. During one of our conversations, Bruce mentioned to me that he was a Toastmaster in his past life. That was such welcome news!  I immediately  enrolled Bruce to be Table Topics Master for the upcoming meeting and he was a willing participant. By the time we approached the day of the meeting, I had about 10 people who had committed to be there and at least 5 of those kind souls had agreed to speak. 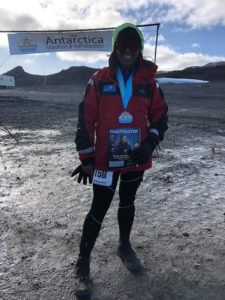 The fateful day came – Slowly but surely, the room started filling up. First it was 8 out of the 10 committed…then, more – we were up to 15 folks… By the time 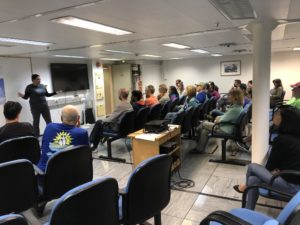 we were done we had 25 people in the room Jeff kicked off the meeting and did a stellar job briefly talking about Toastmasters and why we were all here. I was the Toastmaster and led the meeting expressing gratitude to all who came and promising them it was going to be a worthwhile session. Two prepared speeches and 8 table topics later led by Bruce, we still had the rapt attention of all 25 folks. Most of them seemed to be having a really good time. As the meeting wrapped up, I thanked Jeff, Bruce and the ten speakers profusely and everyone who attended the meeting. I asked them all to sign the banner and they did! (see the banner in the pic with Jeff) After all, it is not very often that a meeting like this happens in Antarctica. Most of them came by and told me that they had a great time and they would look into Toastmasters.  A month later, a couple folks even wrote to me saying that they had checked out Toastmasters after they got back home and one of them told me that she had decided to even join Toastmasters! 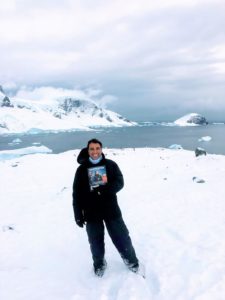 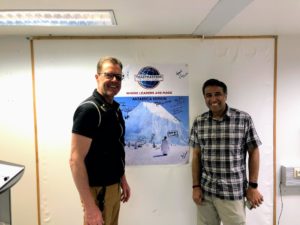 What a great time and we have the pictures to prove it!  There were so many fond memories from this trip and Toastmasters was there with me all the way. Mission accomplished!