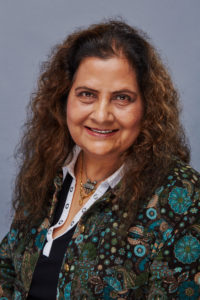 Dr. Anita Jindal joined Cupertino Toastmasters, a President’s Distinguished Club for 19 years in a row, in September 2012. Anita currently serves as Area Director for C6 and is striving to obtain the Distinguished Toastmasters distinction by June 2020.

Q: When did your Toastmasters journey begin, and what compelled you to join Toastmasters?

A: My journey began in September of 2012. I was very focused on my career. I knew about Toastmasters, but I had never explored it. I was in a meeting, and my manager told me to join Toastmasters to improve my public speaking skills. Not knowing much about the organization, I Googled it, and found the Cupertino Toastmasters Club. I attended my first meeting as a guest and ended up joining. I found that Toastmasters was a great platform, and I realized that I should have joined earlier. I discovered that the value you gain from Toastmasters depends on how much time you engage with it. I made good use of my club, practicing speeches.

Q: I saw that Cupertino Toastmasters Club has been a President’s Distinguished Club for 19 years. Can you talk about what that distinction means and how you earned that distinction for the club?

A: The distinction reflects the high energy of the club. The distinction is also a reflection of the officers. The officers are motivated and work well with different club members to help them achieve their goals. The club offers a very supportive environment as well. It is not about chasing after members and asking them to give speeches if they are not comfortable. It is about letting people give speeches at their own pace, but at the same time, thinking about how to grow the club membership. Because the club was so energetic, we invited many visitors, and several guests converted to members. We can clearly see how members have improved over time. The club officers and how they work one-on-one with each member to achieve his/her goals is why the club has received the President’s Distinction for 19 years. Our club is like a family, and I have remained with it for 8 years. Everyone in the club is from a different background (not just technology), so you can learn from many different perspectives.

Q: Seeing as you have been with Cupertino Toastmasters for 8 years now, is there a speech that you gave that stands out to you?

A: I gave a speech about how Toastmasters has impacted me personally and what my journey means to me. Sometimes we shy away from starting the journey or trying something new. My journey started with a nudge from my manager asking me to work on improving my public speaking skills. I went and joined Toastmasters to enhance my personal growth. I wanted other people to understand how I have grown myself and why they should invest in Toastmasters.

When I joined Toastmasters, I used to have a lot of run-on sentences. I used to include several “ahs” and “ums” in my speeches. Because of the constructive criticism I received from a whole community of friends at Toastmasters, I have become a better speaker. Now, I am more confident when I speak at conferences. I have completed interviews and podcasts, and they have been amazing opportunities for me.

Q: I saw that you are a distinguished leader in technology in the Bay Area. How has Toastmasters helped you as a woman in technology?

When I talk to women in technology, I find that there are a lot of women who are facing the same situations as me when I was charting my own path. I was trying to solve my own problems. I had to make my own career decisions. I share my own personal stories about my first job, how I was introverted and did not ask for a raise. I did not receive a raise for several years, and when I received it, it was only a miniscule salary bump. I share stories like these with others, so that they do not have to learn things the hard way. These individuals can use my lessons to chart their own paths and be more informed. We did not have women in technology forums when I joined the industry. There is a lot more awareness now, and women have a lot more opportunities.

Q: Is there one piece of advice that stood out to you and helped you as you made the jump from more technical roles to leadership roles?

A: One piece of advice that stood out to me was about risk-taking and trying new things. When I was a woman in engineering, I just wanted to stay technical. I did not want to enter management roles. My leadership team saw value in me and wanted to offer me a management role, but I was very skeptical. Why should I go into management? I love technology. Eventually, the idea grew on me. My management team reassured me that if I did not like management, I could have the opportunity to return to engineering. When I eventually tried management, I saw a completely different perspective, which opened my eyes to strategic thinking, big picture visualization, networking, and influencing. A whole set of soft skills opened up for me, which I would not have learned had I remained solely technology focused. Because of my experience, I always talk to people about risk-taking. There are many projects that I take on, which are laden with risks, but I always approach them as learning opportunities. There is always a learning opportunity in everything you do. There might be certain areas, which are new or risky, but go try it out because those are the best opportunities for learning.

Q: You recently won two awards in your community – a Timmy Award for Best Manager and an IDG CIO and CIO Executive Council 2020 Ones to Watch Award. Can you talk about the nomination process for the two awards?

A: The Timmy Award is for best managers in different areas across the US. My award applied to managers in the Bay Area. My management team nominated me for the award based on my contributions to the company and how I was leading teams. After I went through the nomination process, I was announced as one of five finalists. I was Director of Engineering, but there were a lot of individuals competing with big titles. There was a category for community favorite, for the who was most popular in his/her community. I was selected as community favorite after several members from the engineering community voted for me through social media platforms.

The second award that I won was the IDG 2020 Ones to Watch Award. This award is for people who are strong in their technical areas and have potential to grow. I will be participating in the IDG award contest this March in Florida, where the award will be presented. My leadership team nominated me, and then my nomination went through the IDG team for review. Individuals were nominated across the US from multiple companies.

Q: What is next for you?

A: Aside for the conference I will be attending in March, I like to speak at women in technology forums. I have submitted a proposal to speak at Women Transforming Technology, which is an event that will be held at VMWare. I will be participating in a Pecha Kucha session at the event. A Pecha Kucha is a type of presentation in which you have to talk about 20 slides in seven minutes. Each slide can only contain one image, and you have to cohesively tie the images together to tell a story. The theme for the Pecha Kucha session is rising. Based on the theme, I have to put together an appropriate slide deck.

A: If you have not started using Toastmasters, I encourage you to as it is the best platform to practice your public speaking. The feedback you receive from your fellow Toastmasters helps you become a better speaker. I have found a lot of value in this platform. Whatever skills you’re building, you can use Toastmasters. Speaking is not just required professionally, but everywhere because you have to speak everywhere you go! No matter what, Toastmasters can benefit you.