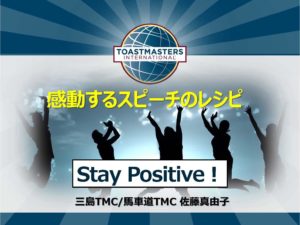 On November 13, 2020, the two bilingual sister clubs, Silicon Valley Japanese-English Toastmasters and San Francisco Japanese- English Toastmasters, co-sponsored a virtual workshop.  Ms. Mayuko Sato, the winner of the Spring 2020 Toastmasters International Japanese Speech Contest, was featured as the guest lecturer of the workshop that was titled, “A Recipe for an Impressive Speech.”

We had an audience of more than thirty participants from both clubs and interested guests, some of whom joined from out-of-state and even from Japan. The workshop was conducted verbally in Japanese. For those who were less fluent in Japanese, the organizers took care in preparing the agenda and provided workshop handouts translated in English. Therefore, everyone was able to benefit from the workshop that lasted about one and a half hours.

Ms. Sato shared her tips, using PowerPoint and YouTube video presentations, on how to put together and deliver an inspirational speech. The following is a summary of the main learning points from this workshop.

Part 1:  How to choose a story line and write a script

Ms. Sato began by using a strong metaphor. Story (subject matter) and Expression are the two pillars of a speech, like the wheels of a moving car.  First, one has to dig deep into the heart to find his/her story. She explained that the basic element of a moving (defined as being poignant as well as propelling a story forward) speech is the development of “a growth story” to which the audience can relate, not a “bragging story.”  She asked the participants, “What are the elements of an inspiring speech?” She received consensus that they are ones that trigger empathy. She further explained that a key to triggering empathy is to start with a weakness such as a failure, flaw, frustration or firsts and then expand to show the growth that a person experienced from facing the weakness. Ms.Sato emphasized that a person can’t change what happened in the past but can change the interpretation of it and one’s attitude towards it.  By fully embracing a bad experience and learning from it, one can find the silver lining.  When a speaker shares this type of lesson, listeners find it relatable and a connection is made at a deeper level.  This then leaves a strong impression on the listeners. She encouraged the participants to try their own growth stories, ones which start with a failure and then result in learning from the failure.  She did this by utilizing breakout rooms, dividing the participants into 6 subgroups of 5 people, with each person relating  a personal experience having to do with failure that turned into a learning experience.

Part 2:  How to express and act

Ms. Sato then moved on to expression. Expression is a technique, and something one can learn by observing more experienced speakers.  Ms. Sato, herself, honed her abilities by studying the techniques of great speakers, then incorporating them into her own presentations.  During this session, she played a video of her speech that won her the Japanese Toastmasters Contest, stopping frequently to explain tips on both script and expression.  She told the audience to present both the conclusion and main point at the beginning of a speech and then to add a pinch of humor.  Key words and phrases should be repeated for effect and to make a stronger impression.  Characters in the story should be human and relatable, not hollow.  Ms. Sato emphasized that a simple storyline is better than a complex one, and that making the story chronological is easier to follow than something that jumps back and forth in sequence.  Complicated story elements can confuse and make the audience lose focus and interest.

Other advice included: avoid interjecting stories that don’t really intersect with your subject matter; embrace using facial expressions and body language to convey emotions; and incorporate changes in tone, volume, and timing when speaking.  She emphasized that variety in body language and vocal tone is a great way to sway the audience – they become more attentive to what is going on.  She encouraged the audience to practice using a mirror and camera to record themselves.

For the conclusion at the end of a speech, she recommended one that calls the audience to action. By saying “everyone” in the concluding sentence, the speech is focused on the audience and less on the speaker.

Ms. Sato concluded the workshop by stating that one should not underestimate the environment in an online speech. Background noises, such as doorbells, online alarms, Alexa, noises from pets or other distractions should be eliminated as much as possible.  Ms. Sato also presented technical tips for online presentations. She herself utilized a wired headset with a built in microphone and an extension cord, which she put behind her back to prevent the audience from getting distracted. The wired option eliminated the risks of poor audio quality. She also used an external web camera to maximize the viewing angle and focused lighting to eliminate shadows and optimize appearance. Ms. Sato even included tips on controls within Zoom to minimize variances in speaking volume.  She emphasized the importance of looking one’s best and to be in a clutter and distraction free environment.

The November, 13, 2020 virtual workshop was very productive and we received positive feedback from the participants. The organizers from both clubs agreed that the workshop was a huge success, thanks to the participants and modern day computer technology. It turned out to be an amazing event for two sister-clubs 50 miles apart, joined by a great speaker 6,300 miles away in Japan with a time difference of 16 hours.  There is much hope and desire for more wonderful online events in the future. 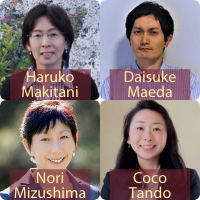